​The Award Ceremony took place in the Maurice Keyworth Lecture Theatre of the University of Leeds on Tuesday 27 November 2018. After a music-accompanied powerpoint slide show of images connected with the competition theme, John Whale, Director of the University of Leeds Poetry Centre and Vice-Chair of Leeds Peace Poetry, welcomed everybody. John Battle, Chair of the Diocese of Leeds Justice and Truth Commission and Former MP for Leeds West, gave a short address on the theme of poverty and food inequality, and Helen Whale, Senior Community Fundraiser Yorkshire, The British Red Cross, gave a brief powerpoint-assisted talk.

​Chief Judge Simon Armitage read one of the poems from Flit, his new collection published in March 2018 by the Yorkshire Sculpture Park, and spoke about the difficulties inherent in judging competitions like this one where standards are so high. He invited winners in all categories to come to the front to read their work. Rehana Minhas, Chair of Leeds Peace Poetry, proposed a vote of thanks for all participants. 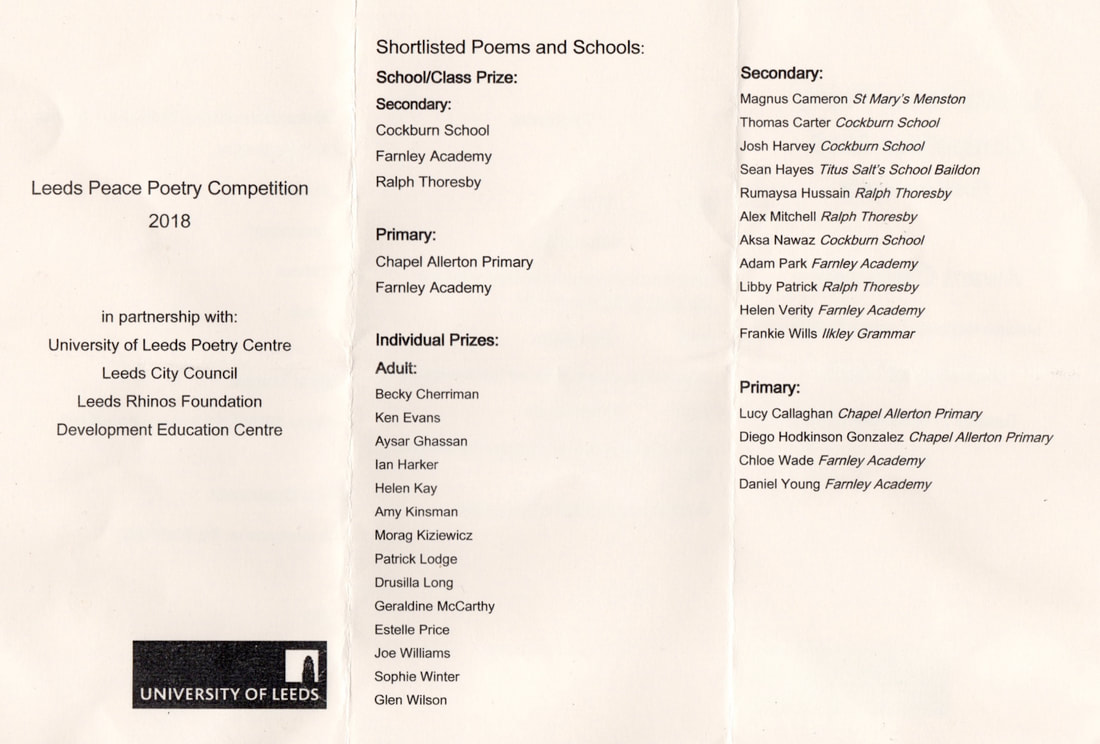 Wasting food. Being rude.
Saving pennies. Don’t have many.
Eating more, Food galore
Food banks. Low ranks
Some are healthy. Some are wealthy
Others poor. Need more
Infinate dinner, Not getting thinner
Living on streets. Beds of concrete.
Food is a right. Day and night.
Being gratefull, Others hatefull
Some emaciated, Not so appreciated

I watched my children as they starve
Helpless, is the only word that I can carve
With no food to give them when morning rises
All I can hope for is that a miracle arises
But with no food by our side
I am swept up endlessly by the tide
Nothing I can do can save us now
Only one thing to do, leave this town
Leave this place, Leave this world, leave
Everything behind ‘Cause I know, when
That happens - Something new will come…

Sharing is Caring But do you?

Some people have too much grub.
You see them waste it in the pub.
Hungry people need it more.
Food Banks serve meals to the poor.
Tax the greedy
To feed the needy.
Sharing is Caring
But do you?

Homeless people in the street
Looking for some bread to eat.
Bake-off is my favourite show,
But why not give the poor the dough.
Tax the greedy
To feed the needy.

Sharing is Caring
So now will you

Hunger
I reap the unexpecting
and course through every living cell,
If you take no precaution
the bell with surely ring,
Call me a seed of evil
but what does that mean if im conceived
within your mind
The guns are drumming
Now the crops are falling
So you need to run, the demond’s coming
Crying, painful, screaming, tearing
Death, loss, falling, nothing
Who will I get next?

Not that it ever is:
Plastic rice- lead to bulk up bread,
It’s all the same story; it’s all poverty.
The “general maximum” of France; modern day food banks,
All I know is history, but I can use my empathy.

The risky days- I chose not to eat, worried about the size of my thighs.
So ungrateful- when there’s some without a choice.
I once developed an eating disorder
-not that kind- it’s just that I physically could not swallow.
I guess I can use that to understand-feeling empty
Losing weight-great.
But lightheaded- hair limp and greasy
Faded vision- legs giving way.

Not like my mate on Ramadan, not a fast like Lent.
But necessity- so empty.
She stares at me; cheeks sunken.
She looks like a supermodel; but she’ll die soon.

She’ll die if we don’t help, it’s not a choice.
Not fashion, hobbies, or juice cleanse.
Not that it ever is-she cannot breathe, her stomach swells.
And now we’ll hear the mourning bells.

Except she doesn’t have to starve- find some coins-
She’s someone’s daughter- we’re all the same.
Just find it in you, don’t refrain.
Help a girl who’s just like me to eat again.

The Reign of Hunger

Our sanity begins to fracture,
the moans of our stomachs bombard us,
How can we be alive?

We are perching on the yawning void, Its
suffocating coils of smoke only remind us of the
infinite depths. Or deaths. You remain unaware – don’t you? –
because we are everything and nothing to you.

Hunger reigns; we are its subjects – it
dominates our bodies, our instincts, our lives. Its unconquerable propaganda
Ensnares any thought of love or happiness –
they are only mere fantasies, snatched away by the wind which envelops us.

Hunger lurks in the shadows; its centre is nowhere.
But unlike any other king or tyrant, its reach is everywhere.
Plants and trees unfurl their leaves to catch the dying rays of the sun
whilst we find ourselves fading.

Substance is the beginning and ending of our lives.
Since our stomachs cannot be silenced with lies,
Nor can the more privileged side of society hear our cries,
Hunger, unlike guns and cannon, ties
the knot between death and us effortlessly.

We take our last sighs.

Feel the monster gnawing constantly. Your
heart starts pumping relentlessly – so much
you often wonder about what life’s for
as you find yourself absent at your touch.
How the invisible emptiness roars
within your stomach. Envy builds towards
those who cherish life. Those with open doors
for themselves. The symphony falls; the chords
bang out the predicament you are in.
The staccato is your frail beating heart.
Your survival instinct leads to a din
all-consuming – you start to break apart.
Death by hunger is such an occurrence
Yet others do not notice your absence.

Turning Circles
(In the North, Tesco delivery-van drivers are still asked to state if they are Irish Protestant or Catholic)

Milk curdles in my arms if I drop at a wrong address,
soft cheese runs to water on the step, coleslaw congeals
at the missed gate; fungi on hummus turns the green
of the South; meat bleeds onto next-door’s fence; chillies
surrender, unconditionally, their furious heat. Fruit yogurt
separates without satellite-location. At one house, a kilo
of British Queen’s, the next, Kerr’s Pink; garlic is Marmite,
one side of the street. There’s those who won't add HP
to fish on Fridays’, no danger, it has to be ketchup, and no
surrender to the flesh.

Two tholes, one boat, each pulled oar dipped in the same lough, no sense
of the other’s timing, the Lord’s Prayer, longer than Our Father.

The turning-circles en-route to Tandragee and Moira; sherry
or stout for some; for others’, Guinness, it is. The best cakes,
Union-baked, for they’ve the folding for extra-fancy. Wakes
are tough on time-keeping, trays of sweetmeats, shortbread,
the loads of heritage; thinner scraps at the Community Centre,
ice-cream from Martelli’s of Portstewart, Graham’s of Drumore.

Two tholes, one boat, each pulled oar dipped in the same lough, no sense
of the other’s timing, Our Father, older than the Lord’s Prayer.

We had come from many colours:
students with gaps, moth-eaten hippies,
yuppies on the run from themselves.

At teatime the metal trays at the hatch
were never-empty paddocks of food:
courgettes, salads, lamb, matzo, cakes.

They filled empty evenings, alongside moans
about scrubbing pans in an oven hot kitchen,
collecting eggs from screaming chicken sheds.

When we were bored with eating,
we carved cucumbers, cut their teary
spines to create cute green statuettes.

Grey kibbutzniks scurried past us.
After tea, they filled their Tupperware tubs,
tucked them in their coats and ran.

At work, they had joked with us,
but, at the moment of food, they were
sealed in a past they could not click shut.

RED KITE, EAST END PARK
No halal. Mohammed holds up a tin of SPAM--
Tesco’s own—that came in the food parcel
with some Cup A Soup and tinned fruit,
a bobble hat and three pairs of gloves.
It's August. A Red Kite is circling
the flexed bicep of Neville Hill Depot.
In Yemen, Mohammed says, his uncle
used to pay him to  kill them. He stretches his arms out.
Big, he says. Kill sheep. He'd take the gun
the army gave him and lay a stillborn lamb
where he could see it.

He's swapping the SPAM with the neighbours
for Warburton's and tea. Last week, a boy
not much older than his son shouted Ham sandwich!
at him on the bus. I bring up a photo on my phone
and write Red Kite. The kids can’t stop laughing
when he says Red Kitty. Some letters, I say,
you don’t pronounce.  His daughter translates,
but she doesn’t understand. I point at Kite.
Sometimes the letters are there, I explain,
but you don’t say them. Sometimes they’re there
and they change all the letters around them.