Our first aim is to promote an awareness of the values of equality and peace. This new page follows from that aim. It is for words and images which give an idea of where we stand on some of the great issues of our time. 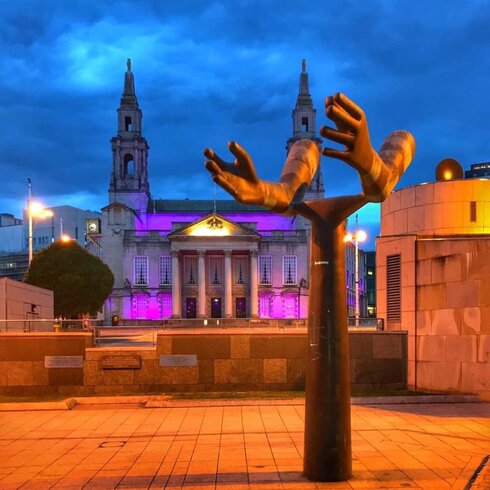 Black Lives Matter! The Civic Hall in Leeds is seen coloured purple, foregrounded by Kenneth Armitage's sixteen metre high bronze cast 'Both Arms' in Nelson Mandela Gardens. A number of buildings in the city have been illuminated like this to show solidarity with campaigners in Leeds and all over the world who took to the streets following the horrific death of George Floyd during his arrest by the Minneapolis police.

Statement by Rehana Minhas, Chair of Leeds Peace Poetry:
We are disgusted by the brutal acts of racism which have led to countless innocent Black Lives being lost. Our condolences go out to George Floyd's family and friends and to all those who have lost a loved one due to institutionalised racism.

In Britain we too have lost Black Lives in police custody. This needs to end. NOW!

Political leaders need to be held accountable for their actions, and this injustice has to stop. We demand an end to the brutal policing of the black communities here in the UK, in the US and across the globe.


5 June 2020 - from Leeds City Council:
People across Leeds are being encouraged to stand in solidarity with those peacefully protesting against racism and all other forms of prejudice by taking part in 8for8 on Monday evening. The 8for8 initiative asks residents to perform one of the following gestures for eight minutes at 8pm on Monday evening (8 June): Members of the public are also encouraged to wear something purple on the day to help honour the colour of solidarity with this cause.

Joint statement on behalf of the leader of Leeds City Council, Councillor Judith Blake and the Lord Mayor of Leeds, Councillor Eileen Taylor:
“We want everyone to know that Leeds is a diverse city that celebrates every single one of its residents and is extremely proud of the wide range of cultures that call this city home. That is why we urge the people of Leeds to take part in 8for8 on Monday evening to underline the city’s solidarity with those fighting against racism and all other forms of prejudice."